Research consists in a slow and meticulous work which means starting from just one name, the deceased one, and ending with an exhaustive list of heirs. Proved facts are essential, hearsay and fond memories are not admissible. Civil registries, population censuses, registry archives, local investigations, are all used by the inheritance genealogist to carry out his research and draw up what will be considered the legally receivable family tree. Finding living heirs is important but the inheritance genealogist also needs to be sure that any other beneficiary has been forgotten, whether ignored or unknown.

This needs going back in time and space to find the traces the families have left.

The inheritance genealogist enters into a Tracing Agreement with the heir. This is a contract in which the heir is informed of his rights to an inheritance which he admits he was not aware of.

The contact clearly sets out our fees based on the relationship degree.

The Archives Généalogiques Andriveau takes on all unforeseen financial costs and particularly the costs of failure for whatever reason; such surprises can include a later will disinheriting the heir, a closer heir coming forward, or the estate’s debts exceeding its assets. We bear the settlement expenses whatever their amount and likewise any inheritance deficit. The heir will never have to reimburse or advance any cost. The heir can take legal advice from his lawyers about the Tracing Agreement, which is a common, fair and equitable practice. 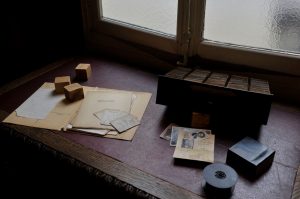